Gnocchi is a pasta made primarily with mashed potatoes and a little bit of flour. When it's good, they can be little pillows of heaven - light and flavorful. But when they're badly made, they are just lumps of lead. The key to making good gnocchi is a light touch and lots of practice! Let's just say the recipe I used from Smitten Kitchen was absolutely fantastic but I need lots of practice - mine were definitely not pillows of heaven, but they were full of flavor and we loved them.

2 pounds Potatoes (the more flour-y the potatoes, the better. We don't get russet here, so I made do with large golden potatoes)
1 1/2 cups Flour
1 tsp Salt
1 Egg, lightly beaten 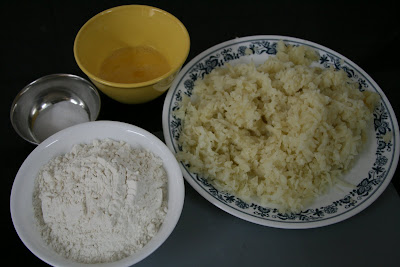 Preheat oven to 200 deg C. Pierce the potatoes all over with a fork and bake in the oven until tender. Allow to cool slightly and peel the potatoes. Grate the potatoes using the large holes of a box grater.

Add the salt and the egg to the potatoes and mix well. Spoon the flour into the potato mixture a little at a time, just using enough so that the dough comes together and doesn't stick to your hands. Transfer the dough out onto a kneading surface and knead the dough for about 3-4 minutes.

Divide the dough into 6 pieces. On a lightly floured surface, with a very light touch, roll each piece into a long rope about 3/4" thick. Cut 1" pieces from the rope. 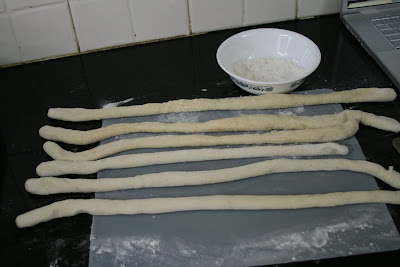 Now comes the part that requires a lot of practice. Gnocchi has little ridges that are, I think, mainly there for cosmetic reasons, but they also trap sauce very well. And, hey, it just doesn't look like gnocchi if it doesn't have the ridges. 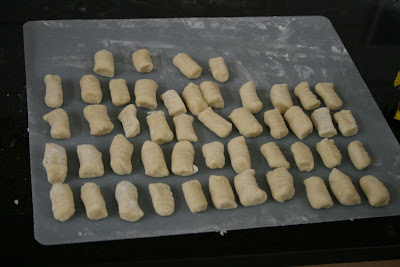 To get the ridges, pass each piece on the inside of a fork, pressing slightly on the tines. I was afraid of handling the dough too much and so didn't put enough pressure. The ridges were there, but not very prominent.

The gnocchi can be frozen at this stage. Remember to first freeze them on a tray and then drop them into a ziploc bag once frozen. If cooking them right away, drop the pieces into a pot of salted boiling water. The gnocchi will start to float to the top, let it cook for another minute and then remove with a slotted spoon.

I tossed the gnocchi with homemade spinach-walnut pesto and grated some fresh Parmesan over it. Delicious! 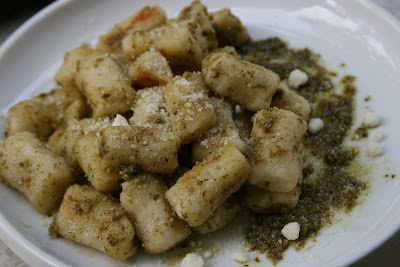 For some lovely unusual gnocchi, see the Celery Leaf Gnocchi at Ideas in Food, Sweet Potato Gnocchi at Wild Yeast, Olive Gnocchi at Vegalicious and Peach Gnocchi at 101 Cookbooks.

Ooh..thats my fav. Made from scratch gnocchi look superb.

Yummy... I made this for our NY eve party last year. Seasoned it just the way you usually like your pasta!! Well... almost!http://chefatwork.blogspot.com/2008/01/potato-gnocchi-in-garlic-butter-sauce.html

I have been meaning to make these cuties... nice recipe.

Looks good, I like anything with potatoes. Nice recipe.

Arundhati, I made it few days back and I loved the homemade ones.Hey the spinach and walnut pesto sounds great idea.

I too made this during my 'anonymous' days from Elise's Simply recipes. It reminds me of stuffed batis - tastes a lot like them except for the ghee used in batis. I have made pesto with pine nuts. Will try your spinach-walnut combo next time!

It is long now that I have been wanting to try my hands on homemade gnochhis. Will soon try it out.

I love gnocchi (actually most Italian food as long as its vegetarian) and yours looks fantastic.
I tried making it at home once. Let me just say those memories have ensured I never tried making it again! :)

Pearlsofeast - thanks a lot. do post yours soon too

Sunshinemom - thanks - never had batis - ghee? hmm. try the pesto - its delicious and the flavors are lovely.

Lakshmi Venkatesh - Do try it.

Aparna - lol - i know what you mean - but you are such an expert, you should try again!

Mmmmmmm! I just posted a review on some imported packaged Gnocchi. Yours looks so good it makes me want to make my own!

thanks darrin. it takes a while to make but definitely tastes better than store-bought!