Zatar is a Middle Eastern spice mix, used extensively in different dishes. The most common ones are Zatar bread, and as a dip for bread and olive oil. Its absolutely delicious. Its a mix of sumac, thyme and sesame seeds, but as with all mixes, you can add ingredients and subtract as you desire. The first three are the base though. Here's a great resource for home-made Zatar. Please read here for lots of lovely information. 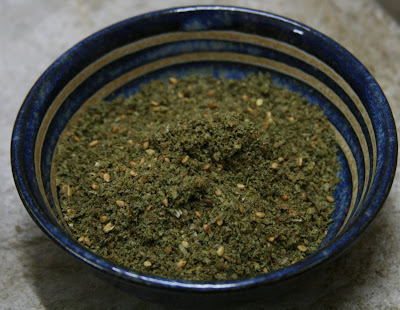 It's sort of like crushed red pepper or Italian seasoning - it's one of those mixes that you can add to anything and it only enhances the flavor. By itself, its pretty mild, and so you need to add a lot to get a Zatar flavor.

I used it in three ways and made a platter. 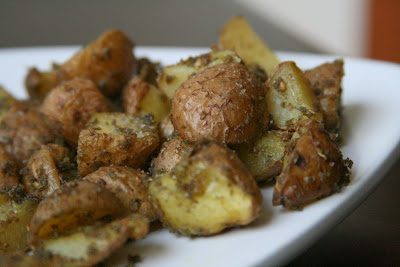 Take a handful of new potatoes and cut them into halves or quarters (peel them if you prefer - I like the potatoes with the skin on). If you don't have new potatoes, you could also cut large potatoes into matchsticks or like french fries. Combine with a tbsp of olive oil, some salt and pepper, and 2 tbsp of Zatar. Pop them in the oven for about 45 minutes at 175 deg C. Toss them around every 10-15 minutes to avoid having to scrape them off the pan in the end! 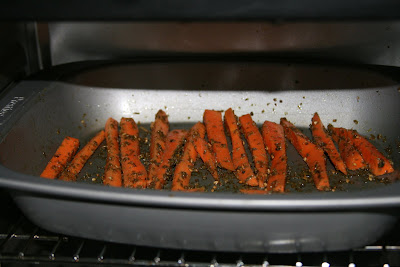 Peel and cut about 3-4 carrots into matchsticks. Toss them with olive oil, salt (don't use too much salt, since the cheese is also salty), pepper and Zatar. Put them in an oven for about 20-25 minutes at 175 deg C. Remember to toss these around too, every 10 minutes, else they stick to the pan. Once done, take them out and crumble the feta on top. 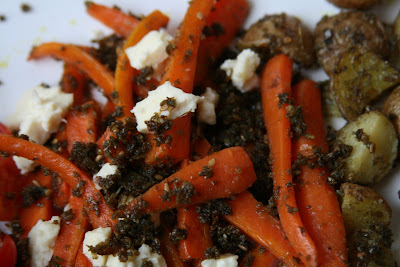 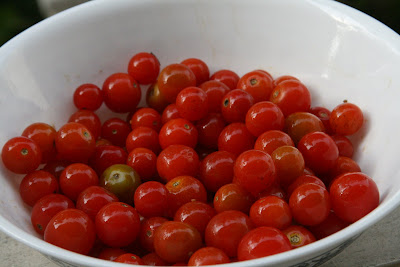 (aren't they beautiful?)
Cut the delicious cherry tomatoes in halves. Sprinkle with salt and pepper and Zatar. Again, don't use too much salt. Crumble the feta on the tomatoes. 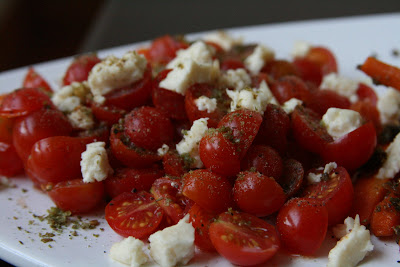 All of them were really good. But the roasted carrots were my favorite - the saltiness of the cheese and the sweetness of the carrots was fabulous with the crunchy Zatar. 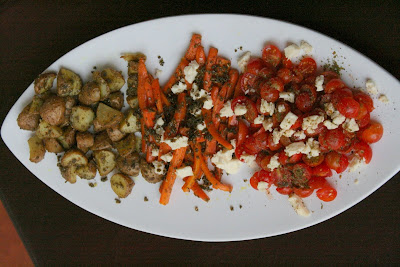 So, Siri, my fellow Marathoner, this is especially for your Middle Eastern event - I hope you enjoy it as much as we did. The AWED event series was started by another Marathoner, Dhivya.

For the Chennai folks: Nope, you don't get Zatar here. I had a friend mail it to me from Dubai! Sorry. The Feta and cherry tomatoes are from Nilgiris.
Posted by Arundathi at 10:24 PM

I want all those three vegiies in my plat, they looks yummy

Looks delicious. Zatar seems very versatile. I wonder if it would make a decent meat marinade?

Zatar looks like a great spice to be in the kitchen. Yummy pics. of mediterranean pnafare. Have added your link to my blog to visit it regularly.

Or simply mix it with olive oil and dip your favorite bread in it :). Zatar is so good.

Wow, sounds very cool the spice! I love those veggies

why do I get the feeling that I should come to chennai and hug u pronto ? Can U guess why ? ;-)

Amazing! I love the multi cuisine menu on your blog:)

hey anu..not only are you sweating..you are making your friends too...everything looks simply superb..and thanks for those notes on our local!..never knew cherry tomatoes are available here..:))..now I am not sure how many you are going to end up cooking for us the next time we meet..the list is increasing day by day!!..:)

Mallika - thanks for stopping by. I'm sure it would - maybe some Zatar and olive oil? I think it would be a better crust for meat, or a coating - as in dredging the meat through the zatar and olive oil before grilling it.

Mitr - Thanks. Yes, it is a great spice to have on hand.

Sug - Yes! :D my favorite way of eating zatar. it is very good!

Cham - Thanks - yes its a very versatile spice.

Valli - why sweating? Those cherry tomatoes are so gorgeous, aren't they? I couldn't bear to cook them - they're so full of flavor and lovely just as they are. I have lots of requests for our next meet from you too!

Thats one amazing platter...Zatar seems to be very versatile too..Now I know what to ask for from my friends at Dubai

damn and i was hoping you found zatar in chennai :D - i have heard so much about it

Wow, lovely mix and everything looks so tempting. Thanks for sharing

Brilliant! I had no idea it was so versatile.

Aru, thks to u, now i know where n how to use my store bought zaatar! :D

Lakshmi - Will happily give you some!

Purnima - Glad I could help!

fantastic recipe arundati... now i got to look out for this zatar.

I never heard of Zatar Anu.. but the spice powder looks delish.. and the carrots n the potatoes n the tomatoes too!!! :)

Thank for such a lovely and unique entry Anu..

A surprise with two awards for you at my blog at the post: http://foodwithapinchoflove.wordpress.com/2008/06/06/nice-matters-and-good-chat-blog-awards/

we have all the ingredients for za'atar will try these dishes for sure.

Sorry to keep bombarding you with these, but there is something waiting for you at my blog :)

What a healthy platter! and those cherry tomatoes look gorgeous!

Roasted carrots with feta cheese- now that's something that I have to try.:D

Sia - It should be available in most Middle-Eastern stores - I would also check in Whole Foods in the International Section. Or you could ask your friendly neighbourhood ME restaurant! :)

Foodwithapinchoflove - Oooh thanks so much - off to check it!

Bee - Very cool. Let me know how it turned out.

TBC - the roasted carrots with feta were really the show-stopper! so good - i literally couldn't stop eating it!

The dishes are inviting......I want all these veggies they are so yummy...

Aru, u r just glad, i m super happy to tell u that i tried the carrot n potatoes yest, though on stove top - turned out to b sooo good that was taken in as dinner by hubby! He just cdn't stop at one bite!! My plan was to present it as appetiser till my parathas were getting ready..hee..tks a bunch to u! U just gave a lovely idea, my zaatar sitting idle was used up, plus earned compliments, saved energy on main meal too!! :D

Purnima - you are probably the first person to try any of my recipes! lol! :) glad it turned out well! :-)

That's a tasty platter. Again I'm amazed by the fact that feta cheese is available there.

Zatar is one of my favorites, I always have friends and family bring me some- but I think I am going to try making it- it is absolutely delicious-

I am traveling thru your blog and loving every minute!

Madhu - yup, we get a lot of different types of cheese here now!

Nadia - Thanks and welcome to my blog! :)

lovely entry anu...i was kind of packed with certain stuffs and didnt blog hop and have missed so much ...
this looks light and yummy...