I was asked to bring a salad to a dinner last night. My family and I brainstormed on a fun new salad. Someone first suggested zucchini and cucumber together because of the similar textures and flavors. Then green apple and green bell pepper for crunch and color. I have a good yogurt dressing recipe, so decided to go with that. And for extra crunch, we decided to add peanuts. In the last minute I added some crushed red pepper for extra zing. It was a true culmination of ideas.
It reminded me of a video of chef Grant Achatz coming up with ideas for new dishes - something called Flavor Bouncing. Watch the video - it's very cool. How exciting to be doing this for a living!! 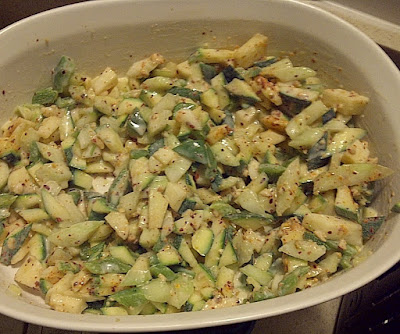 (As the salad was fast disappearing, I had to take a photograph quickly with my phone camera, so excuse the photo!)
Apple (and Bell Pepper and Zucchini and Cucumber) Salad
1 cup Apple, preferably green apple, peeled (optional) and chopped
1 cup Green Bell Pepper, seeded, cored and chopped
1 cup Cucumber, peeled and chopped
1 cup Zucchini, chopped
Dressing:
1 cup plain Yogurt
2 tsp Powdered Sugar
1 tsp Vinegar
A pinch of Salt
Garnishing:
2 tbsp Mint Leaves, chopped
1/4 cup Peanuts, crushed
2 tsp Crushed Red Pepper, or to taste (optional)
Heat a pot of water to boiling. Drop in the bell pepper and zucchini, and quickly blanch for a minute and drain. Cool completely.
Store the chopped cucumber and apple in the refrigerator until ready to use.
Combine all ingredients for the dressing (except for the mint), keep aside. Just before serving, toss the salad with the dressing, garnish with the mint leaves and serve.
Sit back and enjoy the compliments! :)
This is a forgiving recipe. Feel free to use substitutions, or leave out any of the vegetables you don't enjoy. Also a nice touch would be to cut the veggies into long strips. The dressing is a keeper recipe though.
Posted by Arundathi at 7:36 PM

nice and i like this post. i get a good food receipe.
http:// Good food and drinks of our world
http:// Wonder of my world
http:// Physical exercise blogspot
amazon.com/wonderworld20-20

this is a real good recipe, thanks for sharing. where do u buy zucchinis in chennai?