I have a friend who had a birthday recently. She said all she wanted for a gift was a bread a month. Sort of like the Fruit A Month (anyone see that Everybody Loves Ray episode?) Club except of course that this is ... bread!

This month she requested a sweet, nutty bread. I'm not someone who enjoys sweet breads and wouldn't normally have tried this recipe, but her request got me to look into Peter Reinhart's recipe for Cinnamon Walnut Raisin Bread. And it's another winner from Reinhart! 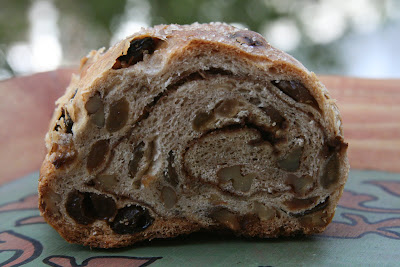 Stir together the dry ingredients (flour, sugar, yeast, salt, cinnamon). Add the egg, butter, milk and water and mix until it forms a doughy ball. Turn the ball out onto a floured counter and begin to knead until the dough is soft and elastic (approximately 8 minutes). Sprinkle in the walnuts and raisins, a little at a time, and knead for an additional 2 minutes. I've never kneaded in chopped nuts before, so I found that a little difficult but the whole thing comes together beautifully as you knead).

Place the dough in a slightly oiled bowl and cover with muslin. Let rise until doubled in size, approximated 1 1/2 - 2 hours.

Turn the dough out onto a floured surface and divide into two equal parts. This next part is optional - If you want that lovely swirl filled with cinnamon sugar, then go ahead. Otherwise, you can just shape each half into a loaf and go to the next step. For the swirl - Gently press each part out into a rectangle (about 8" by 5"), with the long side facing you. Sprinkle the cinnamon sugar over one side of the rectangle. Now tightly roll, starting from the long side facing you. Seal the end and place in a loaf pan, seam side down. Repeat for the other rectangle. Reserve maybe a teaspoon or so of the cinnamon sugar.

Spritz the loaves with olive oil spray, cover with muslin and let it proof at room temperature for about an hour. Preheat the oven to 180 deg C.

Place the loaf pans in the middle rack of the oven and bake for 20 minutes. Rotate the pans 180 deg and bake for an additional 30 minutes (this is to ensure even baking. It really works for me as I've found that the back half of my oven is hotter than the front).

The finished loaf will be golden brown on top and will make a hollow sound when thumped on the bottom. Roll the top of the loaf while warm in a bed of the reserved cinnamon sugar (alternately you can sprinkle some on top of the loaves) while the loaves are warm. The caramelized sugar will give it that extra crunch and burst of cinnamon which is oh-so-delicious! 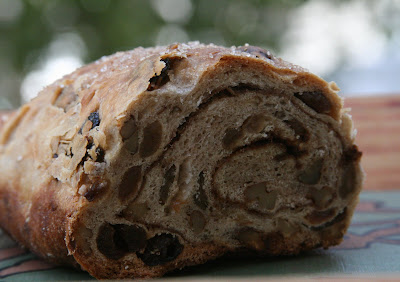 Let it cool for atleast 1 1/2 hours before slicing and eating.

This is for Susan @ Wild Yeast for YeastSpotting.
Posted by Arundathi at 11:17 AM

I didn't know I could ask for such birthay gifts... now I know

your friend is really lucky..She could taste this bread :)
The bread looks awesome..

Yeah i made this bread too, still have to post them , they are really good isn't it, and at the moment i am laking them again and it is in the raising period.
Your look so yumm.
I made them without the walnuts.
I love this book it is a treasure.

Well I'd like the same present !! Did you check the bread baking babes this month ? It's almost this recipe !!

homemade breads are such a pleasure and yours looks irresistable!


Raaga - :-) this is only for people who can't bake or cook themselves - not professionals like you!!

Happy Cook - Yes I love the book too. Every single recipe is a keeper.

Natalia - Oh really - must go check it out - thanks!

Ha! That is such a good idea. Lovely bread as usual. I think I've seen that episode. Love Raymond..I always feel sooo grateful for my husband when I see Ray doing and saying the craziest things!

sounds so good with the nuts and i love the taste of cinnamon..will try this one sometime..

Am gonna ask breads as gifts too..sounds too good with all those nuts, i love the cinnamon flavour in bread, prefectly baked bread looks scrumptious:)

beautiful looking bread .. I want that as a gift too

Ur breads are always Superb Arundhati, I simply love the combination u have used.

Bharti - lol that's true - but I also can read through the lines sometimes because of Ray! :-)

Pearlsofeast - Good to see you here - its been a while. Thanks!

I am going to be completely honest and say that cinnamon raisin bread is not one that I usually go nuts for. BUT the interior of your bread is so beautiful, I think I have become a convert!

Wow, the inside is beautiful, I love the swirl. Great job.

How did I miss this!! Looks very very tasty - I am a sucker for cinnamon:). You could send this to think spice think cinnamon too - I am not very sure but I think it is cinnamon this month!

Your loaf is beautiful, I hope your friend loved it! I gave my mother muffin-of-the-month this year, and it's fun to try all the different recipes.

My next yeast loaf is going to be cinnamon raisin, and I'm researching recipes for it now. Now I'll add Reinhart's recipe to the list. If my loaf turns out half as well as yours I'll be thrilled.
Nancy


Susan - I wasn't a huge fan of sweet tasting breads either, but this one made me a convert too. Its delicious.

Sunshinemom - Oh thanks Harini - will check out Think Spice!

n.o.e - I love doing this bread a month - it really gives you a chance to try new recipes. I hope you find the right cinnamon muffin recipe.

The bread looks beautiful and it is one of my favorites! Your friend sure is very lucky :-)

Mmm looks so heavily studded with fruits and walnuts. This recipe is good stuff.

Jude - Yup, it truly is. Makes you feel loved!