After seeing this recipe from the Bread Baking Babes for Challah, a traditional Jewish celebratory bread, I absolutely had to try it. It looked complicated but I realized the end result was sure to impress. And I was right - about the impressive part! But it really was very easy to make. For the directions, please see the recipe on I Like To Cook. She has impressive step-by-step photos too. 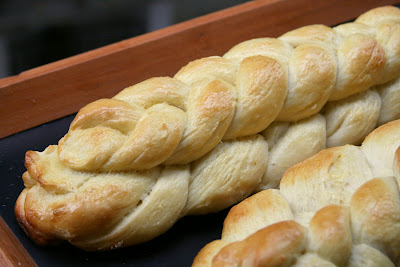 Challah
(from the New York Times Bread and Soup Cookbook)

Stir the saffron into the warm water and stir until it dissolves.

Combine 1 1/4 cups of flour, the sugar, salt and yeast in a large bowl. Mix in the softened butter. Add a little at a time to the flour mixture and blend thoroughly. Beat for 2 minutes with an electric mixer and medium speed, scraping the bowl occasionally.

Separate the yolk and white of one egg. Blend the single egg white and the other 3 whole eggs into the batter. Reserve the single egg yolk. Stir 1/2 cup of flour into the batter and beat at high speed for 2 minutes, scraping the bowl occasionally. Blend in enough additional flour to make a soft dough. Knead the dough on a lightly floured board about 8 to 10 minutes or until it is smooth and elastic.

Place the dough in a greased bowl, turning it once to grease the top. Cover and allow the dough to rise in a warm, draft free place until double in bulk (approximately one hour).

Roll each of these into 12 inch ropes. Braid the ropes together tightly, using your fingers to press the dough together at the ends. Divide the smaller piece into 3 equal portions. Roll each of these into 10 inch ropes and braid tightly. Place the smaller braid on top of the larger one and seal the ends. Repeat this process to form the second loaf. The dough was smooth and elastic and really easy to braid - I was sure this was going to be the tough part but it was actually fun to do. 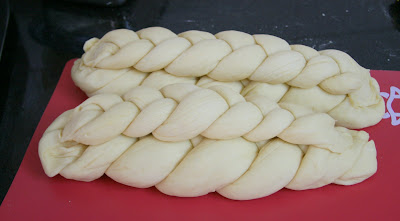 Place both braided loaves on a greased baking sheet. Mix the reserved single egg yolk with the 1 tsp of cold water and brush the top of the loaves with the mixture. Sprinkle with poppy seeds (I left this out), and let the loaves rise until double in bulk in a warm draft free place (approximately one hour). Bake in a 400' over for 20 to 25 minutes. Remove from the oven and let cool on wire racks. 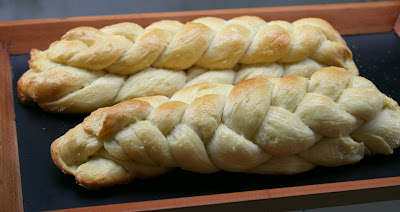 (yeah one of them got a little lopsided!) 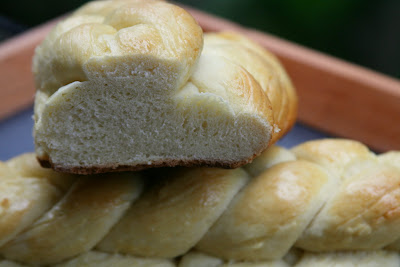 Posted by Arundathi at 8:00 AM

Just perfect! Perfect golden color! Another one from ur baking spree!

Arundathi, thats a lovely golden color n looks fluffy too! What a neat job! Just cant take my eyes off those braids! Thks for sharing!

Very nice one.. ! I have been wanting to make the Challah from a while.. !! This gets me more interested :)

That looks awesome. I made a whole wheat version, but this sure looks great.

Perfect bread,neat and golden outside.Professional perfection.I always admire your bread baking skills.I have to struggle with bread most of times and always feel so stressed out not knowing whether I am doing correctly or not.But the end result is worth all the work,well most f times ie.
You r truly professional,I am in awe of you.Cheers

It looks fabulous.
Wasn't it really relaxing to braid the bread. I thought them while i was making them.
Your braid looks so beautiful.

Thanks for visiting my site. This is nice of you. I never tasted Challah before. You did a very good looking one.

Purnima The braids make it look all glamorous!

Pallavi - You should try it - its such a fabulous bread

Srivalli - It has eggs though, valli - you might not be able to eat it, right?

Anudivya - A ww version? thats great - have to check it out!

Curry Leaf - Oh thanks so so much! Yes, the end results are always worth it!

Bharti - haha!! not really but i think i'll start attending some classes!

Happy Cook - Yes the braiding was teh best part - I enjoyed it - and it was so much easier than I was expecting. Have to go check yours out.

Priya - Not at all - but thanks

Helene - thank you - you have a lovely blog!

Such pretty looking bread, it seems a shame to break into it! You did a very good job of knotting it. I am sure it would have looked nothing like that, if I had made it :)

i really admire your patience, and dedication when it comes to baking! You make EVERYTHING look so beautiful!

looks just perfect .. Gosh U have soo much patience, seriously

Arundathi..pls collect hardblogger award from my blog .. u deserve it...

Wow they look beautiful, and they kept their definition so well, I'm jealous! Thanks for baking with us.

delicious, it is very good toasted with chocolate and dipped in soup too. BTW, thanks for visiting

Beautifully knotted, I love this bread and the smell when baked.

So you were surprised this was not as complicated as the potato bread.
Beautiful loaves! Thanks for baking with us!

What fantastic loaves you baked there!! They look amazing!

Oh look at those braids, so nice and even! Gorgeous result! Thanks for baking with us!

Dear Arundathi you loaves are really spectacular ! I made a bit of a mess with mine but they tasted great !

beautiful..i love how your challah is so tightly braided and all:)

Ranjani - Thank you so much dear Ranjani! thats really nice of you!

Priya - thanks - and congrats on your award

Curry Leaf - Happy Deepavalli to you too!

Sara - It was a pleasure - I really enjoyed it

Maybelle's mom - Yup, we had it with some mushroom soup and it was incredibly good.

Pearlsofeast - Yes the smell was lovely! thank you

My Kitchen In Half Cups - Yes I enjoyed the braiding and it was definitely an easier dough compared to the potato. Thank you.

Lien - Thank you so much!

Baking Soda - Thank you - the braiding was the best part!

Delhibelle - lol thanks - had to braid them twice to make it tight enough!

Wow the challas impressed me... I happened to watch videos on the food channel I thought that was perfect but your is divine...

Nice looking challah! Your braids look so neat:) Loved it!

So beautiful! I wish I could have some right now. Pass the butter, please. :)

Fabulous Braided bread - WOW! Hope you had a Blast...

Collect your Diwali Treat at http://ramya65.blogspot.com/2008/10/chocoholic-award.html

What a beautiful challah, Arundathi!
I love this bread. Nothing ever goes to waste, since the bread puddings are so fabulous from it.

nice place u have here

Your loaves are absolutely beautiful. What a nice job!

Challah looks so perfect in its briaded twist...

Ramya Vijaykumar - thank you so much - so thrilled you compared it to professional braiding!

Raaji - Happy Diwali to you too!

Dragon - I wish I could have some too - all gone. Would've liked so have kept some for some french toast!

Ramya - Thanks for the diwali treat! Yes i had lots of fun braiding.

Vera - I have to make some more again soon - I've got so many ideas now for using the challah!

A Kitchen Scientist & A White Rat Hubby - Thanks Sona - Yes, its a double decker for sure - did you enjoy yours?

It's so impressive once done but a bit intimidating at first wasn't it?

Jude - yup quite intimidating when you first start off looking at those braids that need to be done!

I saw this bread at Jude's and am planning to make it too. :)

Aparna - Let me know how yours turns out. I loved it. And don't forget you can make french toast and bread and butter pudding from it - its absolutely perfect.