After seeing the Daring Bakers make ice cream, I simply had to try my hand at it. It took a lot of research, and lots of running around and lots went wrong. But the ice cream was amazing. And it's all due to David Lebovitz! He's a genius :)

I changed his recipe around quite a bit. I tried not to, but I had to. We don't get vanilla beans here and so I had to substitute more vanilla extract. And we don't get heavy cream either (I just couldn't believe that!), and so I went with regular cream.

I also don't have an ice cream machine, and had to use DL's method for making ice cream by regular old churning. He said in his post that it should probably take 2-3 hours, but I first put it in the freezer at 7 pm and I did the last churn at 3 am! And I couldn't go to sleep because all my effort would have gone to waste. Everything was worth it. Some fantastic vanilla ice cream (couldn't call it "plain, ol' vanilla", because it just ain't so)

Heat the milk, vanilla, salt and sugar together. 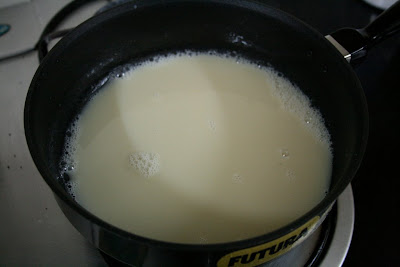 In a separate bowl, whisk together the yolks. Gradually pour the milk mixture into the yolks, whisking constantly. 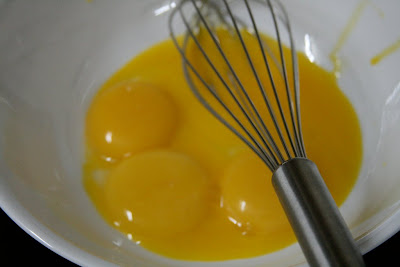 Pour the milk mixture back into the pan. On low heat, keep stirring while it thickens. 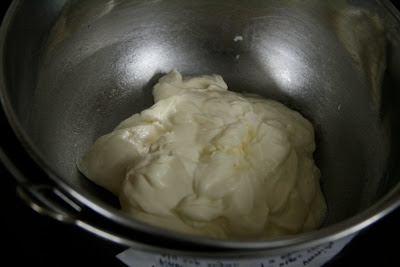 The milk mixture will slowly begin to thick. Continue stirring until the mixture coats the back of a spoon. A good test would be to run your finger over the coating on the spoon - it should leave a mark without running. 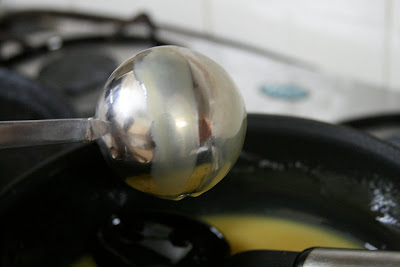 Immediately pour the mixture through the strainer into the smaller bowl containing the cream. Keep stirring until the entire mixture cools down and is chilled.

When cold, pour the mixture into a large (shallow is good) plastic container. Put it in the freezer.

Now starts the not so fun part. Every 45 minutes to an hour, take the container out and give it a good churn with a metal spoon or even a hand-held mixer or stick blender (those make it all easier). Make sure to break up all the frozen parts from the edges in. The better you blend everything, the less icy the end result.

Keep churning until the entire thing is frozen. This took me a good 7-8 hours! But that could also be my freezer. Hopefully yours will freeze up sooner! Good Luck!

But don't you see how fantastic that looks? It's all worth it. Really, it is! 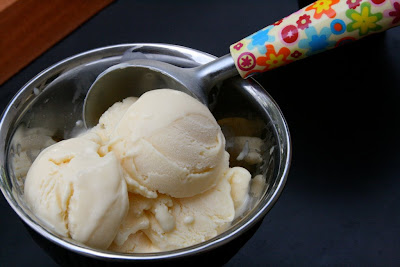 Posted by Arundathi at 9:36 PM

Danggg Ice cream from scratch?!!! that's phenomenal:) Looks completely professional too...can't believe it was your first attempt! You must have a LOT of patience:))

I totally agree he is a genius.
Ice cream looks so perfect and so yummy.
If you ever go to Munnar in Kerala , you will get lots of Vanilla beans there.
I bought some 75 sticks from there and it was really cheap especially if i compare the price i guve here.

Wow..Simply awesome.I have never believed that ice creams can be made at home until seeing yours :)

you get fantastic inexpensive whole vanilla beans in places like wyanad, kerala. 10 rs. each or something. try to get hold of some. i've shied away from buying an ice cream machine. would love to try this.

Wow! You stayed up till 3am to churn the cream!!! No wonder it looks so good!

Thanks so much for passing along this ice cream recipe. It looks absolutely ravishing, I'm am defiantly going to give this one a try... Although I'll have to wait till the weekend to make sure I have enough free time to do it properly. Thank you again

I've not bought an ice cream for this reason alone. I'd be making ice cream EVERY day. And that is the last thing I want. No, make that need. :(

It looks so professional, Arundathi!

looks nice and creamy! i can never get my icecream this creamier! :(

You do get vanilla beans...I could get them for you the next time you want some.

Looks so professional. Got the perfect scoop. I have been drooling over DL's icecreams, but never got around making it. Kudos to your patience.

That looks like a perfect scoop of ice cream! Very nice.

OMG! I cannot believe that you managed to make it look so fabulous even without an ice cream maker!
And you stayed up till 3:00 a.m. to make it! Fantastic results though...well worth all the trouble taken.:D

This is very similar to my mother's age old recipe. Yours looks so professional. I haven't really tried making ice cream at home except for kulfi.

Sorry about yesterday, my computer was acting very funny.


Thanks so much everyone!!!

Ranjani - Yup, I tell you, I've discovered that when it comes to cooking, I seem to have tons of patience. Can't say the same for other aspects of my life!!

Aparna - His ice cream rocks. Got to find out if I can find his book here.

Happy Cook - Oh thanks a lot - didn't know about that!

Divya Vikram - thanks a lot!

Bee - Didn't know that they were available in Kerala. Going to try and source it now. I too don't think I can ever own an ice cream machine - that would be just plain scary! I'd never be able to leave the apartment!

SJ - Yeah, tons of patience and a good book to read!

Sandy Waters - Thanks for stopping by. Yes, please wait for when you have lots of time on your hands - it helps!

A & N - Thanks a lot. Yup - even without a machine, life is tough. With a machine, I'd probably be imagining up sorrows that I need to drown!! lol!

Superchef - Hmm might be just the churning. Have you tried a stick blender? I made this by hand and a very strong metal spoon, but a blender would have really helped.

Rachel - Oh thanks - where can you get them in Chennai?

Jayasree - I have to go buy his book - after that one ice cream, i'm sure they're all great.

TBC - Yes it was truly worth the effort. And let me tell you there's very few things for which I'm willing to stay up till 3 am!! lol!

Raaga - Thanks - gonna go check out the recipes. I love kulfi!

vanilla ice cream will be my first choice .........am drooling here

Thanks for stopping by at my blog and your kind comment. Your blog is great and I need some time to go through it :)Can't wait to try out some of the recipes here.

Shama Nagarajan - Yes, its always my first choice too!

Alka - Absolutely - Chennai's getting too too hot!

Homecooked - :) Hope you enjoy it!

iCook4Fun - Sure, anytime - love your blog. I hope you enjoy the blog

i like this ice cream.. i doesnt have any chemicals at all! most ice creams do.. and that wat i dont like about them..thumbs up to this recipe..

What a process! Good for you Arundathi for the amazing looking ice cream. I bet this was a huge hit in your house!

I have heard so much DL's method and I need try it sometime. I have never ventured into making ice-cream. Churning at 3:00 AM, now that is commendable.

ice cream without the machine, now we're talking.It's beautiful! thanks for sharing this recipe

So yummy! I've had some late night cooking projects like that before... LOL


Churning The Word Mill - Most homemade recipes don't use chemicals - try it out!

Jamie - Nice to see you here! Thanks so much!

Delhibelle - you're welcome. i do hope you try it.

The American Homemaker - LOL - I think you know you've found something you love to do when you stay up till 3 am doing it!

Anu thats fab one..looks yummy!..where have you been so many msgs no reply..

Oh, I'm so glad your ice cream worked out! Vanilla is my favorite. Worth staying up for sure.


Srivalli - msgs? I didnt get any - will get in touch with you!

Usha - Thanks so much!

There is nothing ordinary about a good vanilla ice cream. It's my favorite! Well done!

hi,
What a perfect looking drool worthy scoops...yummm I haven't made ice-creams at home, must give this a try. Thanks for the recipe.
TC


SGCC - My favorite too! Thank you!