Sabudana or Sago pearls are very similar to Tapioca and may be easily confused for the other. But they have very distinct tastes. Sago is used extensively in Indian cooking.

Until recently I didn't know that they are mostly carbohydrates and have minimal nutritional value! On the other hand, they are delicious, especially in these cutlets! And you can get your protein from the nuts! :) 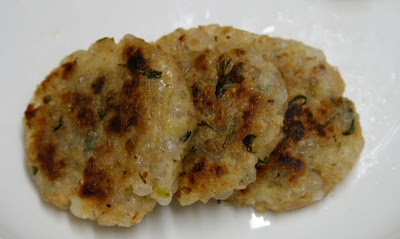 Soak the sago for about 8 hours. Drain the sago and dry on a tea towel. 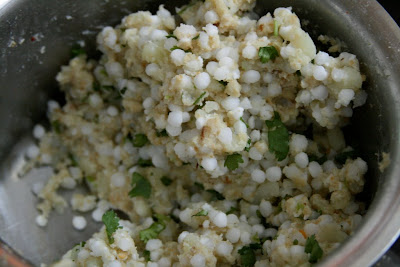 Roll them into walnut-sized balls and flatten to form a cutlet shape. You can make them as large or as small as you'd like - smaller ones cook faster. 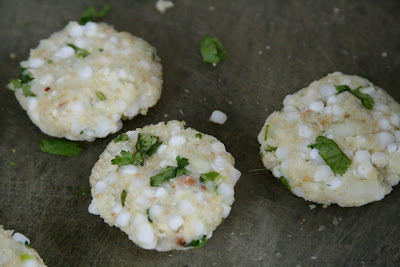 Heat about a teaspoon of oil on a skillet and place the cutlets, a few at a time. Allow to cook until slightly browned and flip over, until both sides are golden brown. 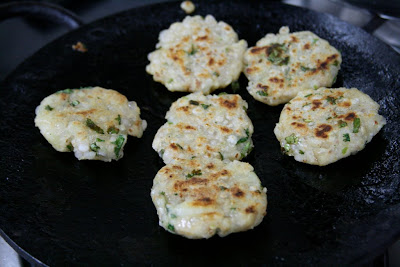 Serve hot with chutney. The cutlets are great the same day. If you are saving them for later, store in the refrigerator and heat in a toaster oven for a few minutes before serving. 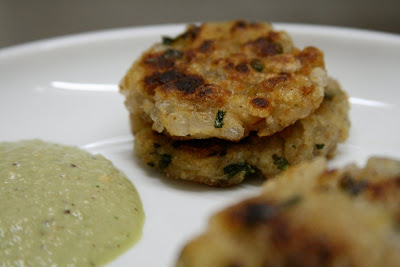 Posted by Arundathi at 4:03 PM

You're right, until recently even I was not aware that they lacked nutritional content and they suck up waay too much oil! But these are majorly yummy and sometimes that's all that counts!

Looks very different and a yummy cutlet..I love the idea of adding nuts to it :)

I have never made anything with sago and this looks really yumm.

I make these sometimes but not often. Looks so yummy, can't wait to try it again! :)

Quite a different cutlet, love the addition of nuts..

I have seen sago cutlets that are deep fried, but this looks healthy+tasty!

How different and truly delicious sounding.

I adore little cutlets like this, though I've never cooked with sago. Something I would be sure to like though.

The cutlets look perfect. They are so much better that the deep fried vadas. Have bookmarked this one.

They look wonderful. I love sabudana because of the crushed nuts, this would be a great twist on that.

the bright side is that you have defattened the deep fried sabudana wada, the dark is that it is still a carb bomb,but sometimes isn't that exactly what we want:)

First, I didn't know that they both were different. Secondly I have not prepared anything with sago as the main ingredient. We used it only for vadams in our house and ocassionally my grandmother would soak it along with lentils while grinding adai. It gave such a crispy and great adais that everybody would ask her the recipe.

As Rashmi as mentioned frying it in a tava definitely makes it little bit healthy.

I think my mom made these once and they were darn tasty.


Thanks everyone. Yes, the nuts definitely add a nice crunch to the cutlets.

Ranjani - yea yea - taste is great, but it wouldve been nice to discover something that was healthy and tasted great

Shama - off to check it now...thanks

Lisa - Love the stuff on your blog and I have a feeling you'll like this too!

Delhibelle - Thanks - can't deep fry for the life of me.

Madhuram - Yeah tapioca and sabudana are very different. What a great idea to use it in the adai mix!

Bharti - yeah they're so good!

Totally new recipe to me. I had no clue that one cud fix cutlet out of sago...nice one, dude.

I have had sabudana vadas that are deep fried. never tried it this way. looks awesome

Beautiful looking cutlets. better than the deep fried ones.

they hold shape this well? never would've guessed. i have a packet lying around somewhere. the only way i make them is khichdi. this is worth trying.

Deesha - thank you. a little more healthy than the deep fried version.

bee - yup, they hold shape very well - infact they act as a binding agent when shaping the cutlets. try it sometime!

oh, we call that sago in my country too! but I've never had those in savory applications.. only in drinks and desserts... pretty interesting.

My mom always made Upma with them! This seems so easy to make! Will try :)


Jescel - Oh that is interesting. I've never had it in a sweet/ dessert. Cool.


A &N - Upma sounds great too! Thanks for the idea!

I've had loads of this as a child... and also bought it on the train in Bombay... there's this lady who brings the stuff everyday to VT station :)

Skillet frying is a great idea. I usually make this: http://chefatwork.blogspot.com/2007/07/sabudana-khichdi.html


Raaga - You've gotta skillet fry the stuff. Sago soaks up too much oil, so deep frying makes them soggy and oily!

I am going to make this cutlet and send it to Ashwini's MBP-Snacks and Savouries event. Will let you know how the cutlet turned out. I have tasted deep fried ones called sabudana vada, a maharashtrian speciality, I guess. Seeing shallow fried one for the first time. Thanks for sharing this recipes.
Priya

I love these sabudana vadas and the similar khichdi Maharashtrians make when they are fasting.
That your version isn't deep fried makes it more appealing.

Hi Arundhati,
I made the cutlets today. It was awesome. I also sent this as my entry to Ashwini's MBP-Snacks and Savouries event. Do have a look at my blog.
Thanks.
Priya.


Aparna - I've never had the khichdi...must try it someday! Thanks

Priya - I'm so glad you enjoyed it! Thanks for the post!

You must also make sure that it signifies the bond between thomas sabo bracelet you and your partner, who have come from different ethnicity, discount thomas sabo bracelet background and of course have different personalities and way of thinking. And if you are looking for perfect ring then you must also make sure that the ring which have selected for cheap thomas sabo bracelet your bride must fulfil all her requirements in terms of style, design and metal. thomas sabo bracelet clearance You can find host of choices in wedding rings ranging from traditional to modern designs. You can also engrave some personal messages on your ring as a reminder and expression of your lifetime commitment. But no matter whether you are buying wedding rings that are already available in the market or you are designing your thomas sabo charm bracelet own ring it is good to allow your lady to select the ring for herself. This will help in you in your selection and you will be also satisfied that your lady will love the ring. Your lady will wear thomas sabo bracelets uk the ring everyday for her rest of the life. Hence you must make sure that you are selecting the best ring for her. thomas sabo charms bracelet And today you can find that thomas sabo sale uk there are many online jewellery stores offering wide variety of rings for affordable prices and has made the selection thomas sabo jewellery much easier for you. Celtic jewelry designs have a very thomas sabo silver ancient heritage. The history of Celtic Art is fascinating, rich with myth, folklore and mystery.