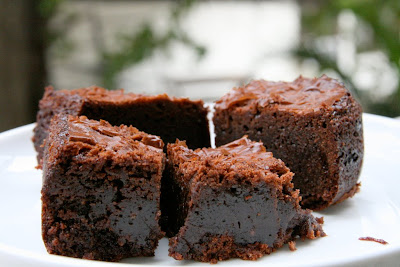 There's absolutely nothing to say about these brownies except that they are in one word Un-Friggin-Believable! I am on a cookie/ brownie cooking spree of my bookmarks.

I have also been keeping my daughter occupied during her holidays. And today I made these with my nephew - he's so enthusiastic and excited about cooking - so let me just say they tasted even better!

I made a few alterations to the original recipe. My nephew doesn't like peanut butter, so we substituted 1/2 cup Nutella for the peanut butter - so now we have 1 cup instead of 1/2 cup nutella. And the chocolate chips were added on as a topping, but we mixed it right into the
batter. 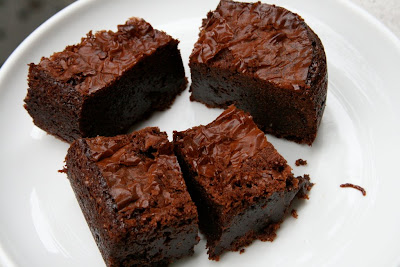 Nutella Brownies
(recipe from Noble Pig, and originally from Culinary in the Country)

Sift together the flour, cocoa, baking powder and salt. Set aside.

On a low heat, melt the butter and add in the sugar and vanilla while stirring to combine. Remove from heat and cool completely. Add the eggs one at a time and mix well to combine after each addition.

Add the flour mixture, a bit at a time, to the egg mixture until completely mixed in.

Heat the nutella in the microwave for a little bit until you get it to a runny consistency. Add the nutella to the batter and mix well. Now add the chocolate chips and mix to combine.

Pour into a square baking pan and bake for 30 minutes. Remove from oven and cool completely before cutting. We couldn't wait and that was a mistake. Parts of it were still warm and so a little like melted chocolate in the center (sigh - can't go wrong with some molten chocolate, can you?!). It did eventually all firm up. And the kids walloped it with some strawberry ice cream (I would've chosen vanilla, but hey, it's all for the kids!). 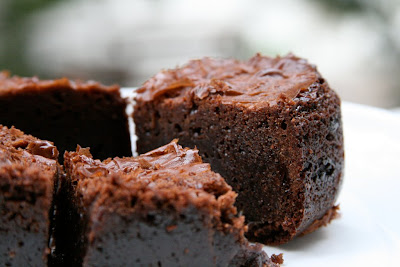 As I said before Un-Friggin-Believable. Truly Death By Chocolate!! And what a good way to go! 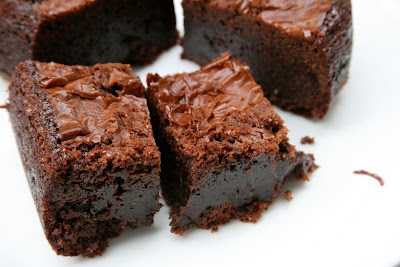 Posted by Arundathi at 9:29 PM

u have this great way of making every recipe in here look very do-able. Thanks for that :)

I just looked at some peanut butter brownies elsewhere! Am growing fat just looking at these:)


Nags - Thats such a lovely compliment. Thank you.

Kitchen Flavours - Yup it really is.

Rekhas Kitchen - Do make it.

Sunshinemom - I made these and truly felt fat just looking at it. its so amazing that its worth just a every bite.

Just looking at the pictures is giving me a chocolate craving, I am sure these tasted awesome :-)

Hell yeah!!!! I am ALL about Nutella, I am sooo making this tomorrow:) I'll let you know how it turns out.

Looks so moist and yummy and i do love nutella.
I can eat them in pots na dpots :-)

OMG.. those brownies look sooooooo good.. moist and decadent. My hubby is going to go bananas if I make them. Thanks for the recipe. Will be making them soon.

Looks so lovely,moist and tempting enough for my son to growl....Mom when the hell will u start baking??..lolz
Happy Holi to u dear,may u enjoy the festive mood with the family

Oh My! Brownies and n.u.t.e.l.l.a! I would kill to have one of those sinful brownies right now Arundathi.

Those brownies look so mosit and Nutella chocolate oh my these are pure heaven!! Great bake Arundathi.

OMG!! Those are divine...i can kill for those brownies!!!

These do look like my kind of brownies with just the right amount of fudgy!!

The brownie is making me drool..Im bookmarking it..

these look wicked. i saw a recipe or homemade nutella (without the transfats). gotta make that first

Oh wow, these sound amazing! I copied it down right away to try. I am interested, do you prefer it with or without the peanut butter? I am asking because I made a peanut butter frosting for my last batch of brownie and my hubby found it a bit overpowering. I can't wait to try these :)

Yes, un-freakin-believable was the first word word that came into my mind too when I saw the pic! They look truly fantastic!

Un-freakin-believable,yup thats the right word.Nutella by itself is irresistible and you make brownies with it!!Love the fudgy and moist look..truly amazing!!

All chocolaty and gooey, cant stop ogling. Ur right, they are Un-Friggin-Believable!

Happy cook - Sigh. Wish I could have them in pots and pots.

Pavani - I hope you do make them and enjoy!

Alka - Do start baking. The kids love doing it too!

Priya - Don't have to kill, dear! Just go down to the local grocery store and buy the nutella!!

Rosie - They are definitely little bites of heaven! Thanks so much. Its a great compliment coming from a wonderful baker like you.

Superchef - Don't anybody kill anyone! Wish I could send you some!

Bharti - I hope you love them!

Bellini Valli - Yes they're moist, dense and chewy with a wonderful after taste.

bee - homemade nutella - that sounds amazing! glad the comments are working now too.

Holler - I actually preferred it without the peanut butter - I like the pure taste of chocolate, though. The nutella and peanut butter are both very strong flavors, so they kinda compete with each other, so not such a great thing. Cocoa with peanut butter might be better.

Divya Kudua - They truly are fudgy, chewy and delicious.

Yum, yours are so fudgy, perhaps I baked mine to long.

Amazing! I must find time to get baking again.

Lisa - These are sure to get anyone back to the oven

These look yummy! I love Nutella!

Wow oh wow these are my idea of brownie heaven!! I love Nutella and these look so delish.


homecooked - I think everyone does - its pure heaven!

Maria - Oh thank you. Anything with Nutella has to be delicious!

Give me chocolate in any form, especially as brownies and I'm in heaven.
Though nutella is quite expensive here, I might just be tempted to buy a jar for this.:)


Aparna - These brownies are worth every penny of the jar of Nutella.

The addition of nutella automatically solves the fudgy vs. cakey problem when usually making brownies (with fudgy coming out with a glorious victory.) I don't think I will ever make brownies without nutella again!


Anonymous - You're quite right - this just has to be the perfect brownie recipe.

wow! they look delicious =]
im so gonna make them

So delicious!! :D I am going to try this today! I hope it turns out well :)

I bought nutella, fulling intending to make these brownies. Instead, I melted it in the microwaved and dipped preztels in it...

I inclination not agree on it. I over warm-hearted post. Especially the title attracted me to be familiar with the whole story.

Nice post and this fill someone in on helped me alot in my college assignement. Gratefulness you as your information.

Hey I made these and they turned out really good! My whole family loved them =]!

Has anyone found that 30 minutes is not enough time?

Thanks for the recipe! I tried it for my boyfriend's birthday, and I practically cried, the batter was so good.

Hello, I do not agree with the previous commentator - not so simple

I am crazy about Nutella. I love it. I will make those brownies for sure.

Made it this weekend, and darn it, it was sooo yummy!!!! My wife said it was really good too! I was wondering if there is anyway to bring out the nutella flavor even more? It seems hidden behind all the chocolate and cocao power. Add MORE nutella into the mix perhaps? (Yay!)

Thanks for posting this awesome recipe!