A few years ago I was involved in a recipe chain letter. You know those chain letters that you mail to 5 people as well as the people who mailed it to you? Well, this was the fun version of that!

One person emails a recipe to 5 people and those 5 people each add a recipe and send it to 5 others including the ones who were originally on the list. At the end of it you get hundreds of recipes! It's pretty cool. So thank you Saima, whoever and wherever you are, for this lovely recipe. 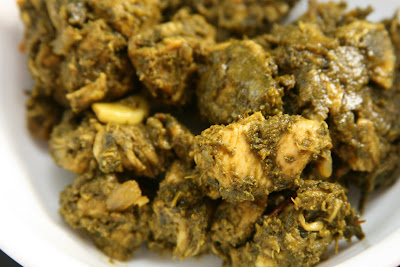 Fry the chicken lightly in 4 tbsp of oil for 3-4 minutes until lightly browned and set aside.

Put the spinach into a deep pan, add 1/4 cup water. Bring to a boil and remove from heat. When cool, grind in a blender and set aside.

Add spinach and garam masala. Cook until spinach starts sticking to the pan. Remove from heat. Add butter and keep covered until ready to serve. 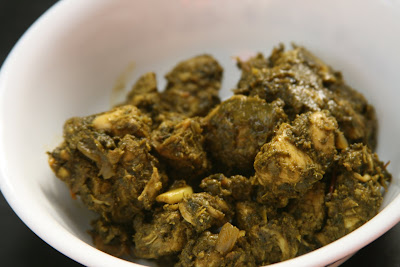 Posted by Arundathi at 9:59 AM

This looks gorgeous! I have also bookmarked your stuffed pizza page! that looks yum.

I've never seen anything like it. Very interesting dish; worth a try for sure. Thanks for sharing with us.


@ Jessica - Thanks. I hope you try it. Its quite a favorite at home.