India is a caste-ridden society. One of the castes is Brahmins. Traditionally, they were the scholars, preachers and educators. Now, Brahmins make up about 4 % of the entire population. Now, in the Brahmin class, there is a sub-category called Iyengars (pronounced eye-en-gars). Though there aren't many glaring differences between the sub-categories, there are subtle differences. Some of the subtle differences exist in the food.

South Indian food is mostly healthy with subtle flavors, steamed or cooked with a bare minimum of oil. One of the lesser known foods of the Iyengars is Ilai Vadam (Ilai means Leaf in Tamil and Vadam is a crispy snack - but in this case, the vadam isn't fried, but steamed).

It seems to be a dying food (if there's any such thing!). We love it in our house. Its a time-consuming activity, but so worth the effort. Basically, its a batter of rice and sago, mixed with green chillies and cumin. It is ladled over banana leaves and steamed until done. 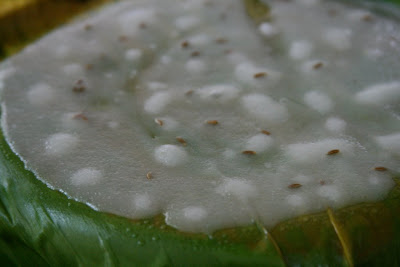 This is going to be a pictorial explanation of the process.

1 cup Raw Rice
1/2 cup Sago Pearls
4 Green Chillies
1 tsp Cumin Seeds
Salt, to taste
2 tbsp Vegetable Oil
15 Banana Leaves, each cut into half (you could also use saran wrap cut into squares or thin plastic sheets that hold up when steamed. I'm sure it's difficult to get banana leaves in most places, so you could use plastic wrap if you must.) 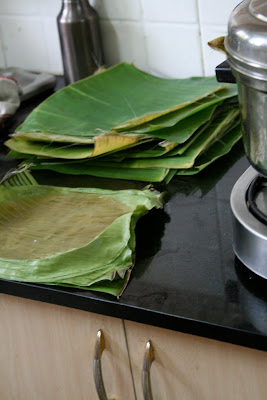 1st Day:
Soak the rice in water for 2 hours. Grind with water to a thick, smooth consistency. Cover and keep aside (leave it outside - do not put it in the refrigerator). 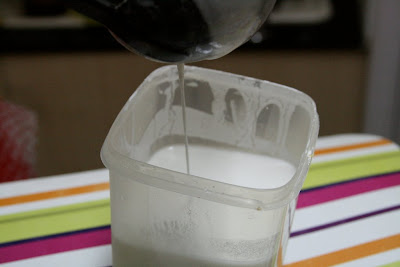 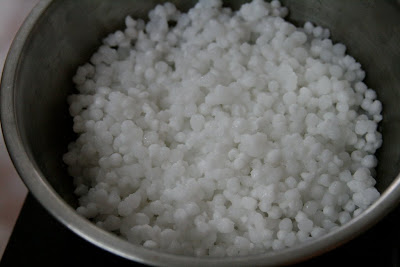 3rd Day Morning:
Grind the soaked sago with green chillies and salt to a smooth consistency.

Mix the sago batter with the rice flour batter. (The rice flour batter has been left outside for 3 days now and might have developed some dark spots - this is fine and is expected - it has not gone bad, and you don't have to throw it away! )

Add the cumin seeds and oil to the mixed batter. 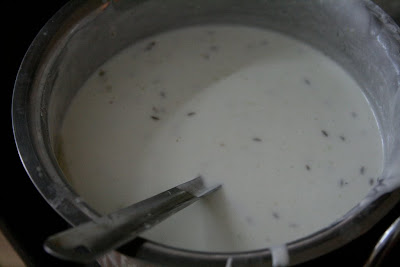 Prepare a steamer. I used a tall steamer with about 2 cups of water at the bottom. Then put an inverted plate or bowl or any flat surface at the top. Make sure you have a close fitted lid. 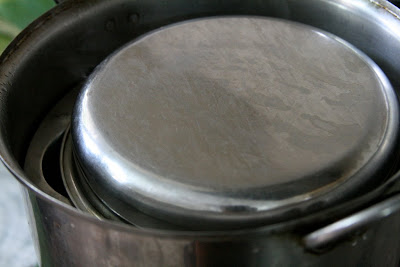 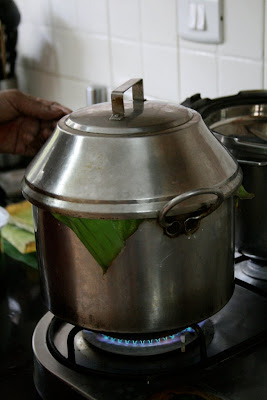 Now spread about a ladle-ful of batter onto a banana leaf (you have to do this one at a time), in a circular motion (like you would for a dosa) and try to spread it as thin as possible. 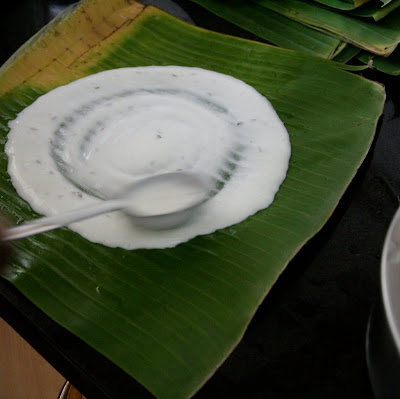 Carefully lift the leaf and put it on the flat surface. 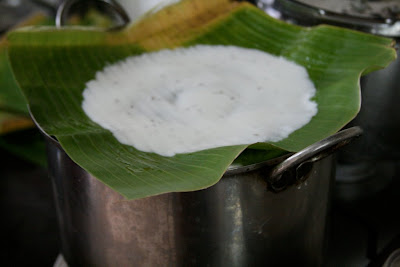 Close the lid and let it steam for about 2-3 minutes. 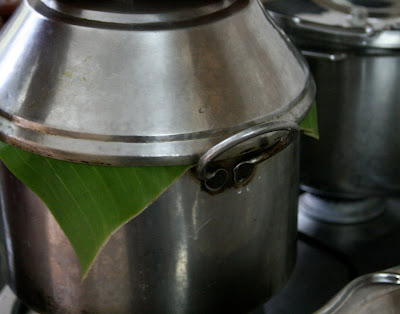 There will be puffed up little bubbles all over, which will flatten out after a few seconds. 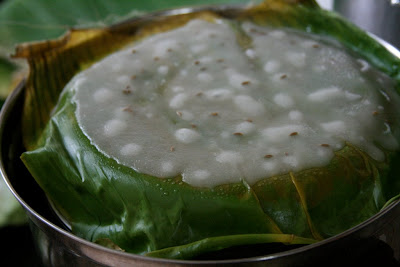 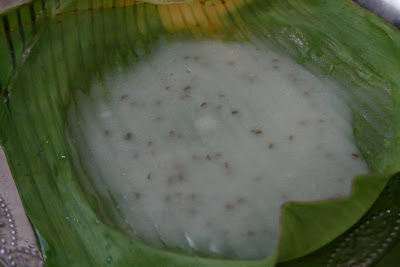 You could just peel off the leaf and eat it. Or you could roll it up into a cigar-shape. Or, you could add some stir-fried veggies and roll up to make a steamed Indian-style spring roll! 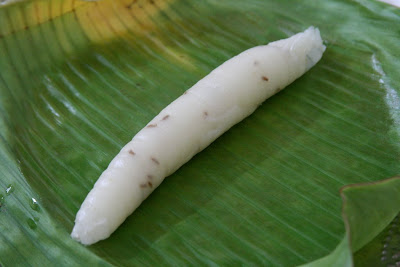 I'm not sure if anyone reading this will try it, but if you do, kudos to you for trying something new. I hope you enjoy it as much as we love it.

This is as traditional an Indian food as you can get! :-) I wanted to tell everyone about it just to spread the word and hope that this beautiful dish doesn't die into non-existence.
Posted by Arundathi at 5:31 PM

Where did you get that steamer? I steam a lot, but the one I have is western style steamer (All Clad), and they not really a useful for making any kind of Asian treats or cooking This Ilai Vadam sounds really delicious. Never had it before, I certainly will try if I get a chance.

I am so sorry to you've tried it for 6 times and failed. Please don't give up, it suppose to be a forgiving recipe, really.

As soon as the butter start to ooze out, you must right away wrap the dough in plastic and refrigerated until the dough is completely cold. This is the secret of making any laminated dough. I included the link to a good site for making this pastry. It's very informative and clear writing as well.
Hope you won't giving up of making this pastry.
Cheers,
elra

Oh, I've eaten this once I think. But I'd love love to try it out Arundati!

Hmm...I promise to let you know. This one needs steaming. You think a bamboo steamer will work?

Elra - I've tried the recipe from Foodbeam too. Worked better than the others, but still not okay. THanks for the encouragement.

Nandini - Yes, a bamboo steamer should work or any pot that has a close fitting lid, as long as it's tall enough to make into a steamer. Thanks - do let me know how it turns out.

I ve had this in my friends place! Nice post with step by step pics.

i have never had this before and looks like i will like this. Cos i remember eating the batter for the regular vadams made with sago and green chillies and all, even before it was put out in the sun :D:D steaming it will only make it delicious, im sure! :)

wen i was a kid, i remember my aunt n grandma used to prepare this in my native.. long since had tried this... now they dont have patience to do this :(

Seems like we need some pre planning but not a tough job, and the outcome is simple stunning... I have never heard of this... Am planning now, gotta make this soon...

chef and her kitchen said...

I love traditional dishes...n urs look really traditional...will give a try when get a chance..:)
Nice way of explanation!!

We don't agg sago to the ilai vadam. That's only in the javvarisi vadam :)

Also, we then dry them in the sun and then deep fry... 2 more steps in the process at my place :)

It looks fascinating dear but yeah I won't even pretend :-(
Some day I'll visit your home and you can make it for me :-)

That looks great & Iam dying to taste this one. Do you think I will be able to find this in restaurants that serve authentic Tamil Brahmin food?

Hey, I was just wondering what if leave the rice batter outside for just 2 days instead of 3 days??

simply superb nice step by step pic. and thank you so much for the recipe

What a great tutorial! I felt like I was watching some fantastic show on Indian cookery :D Thanks for sharing that Arundathi!

Divya Vikram - Oh have you? Thats great. Thanks.

Superchef - Yes we used to eat those half dried batter - it was so delicious!

Lavanya - Thanks. Glad you enjoyed it.

Eternal - Yes, it really takes some time, but so worth it.

Priya - Thanks so much.

Vegeyum - You could also use a pressure cooker with the weight off. Thanks.

Ramya Vijaykumar - I hope you enjoy it. Let me know if you do prepare it.

Raaga - We don't make the dried vadam like this, but when we make steamed ilai vadam, we add the sago.

Deesha - Nope, I really doubt you'll be able to find it. I don't think its even made in most houses anymore. If you do find it, let me know! It needs atleast 48 hours to get to that point. Which is why, if you soak it on the 1st day evening, it'll be ready by the 3rd day morning.

Rekhas Kitchen - You are very welcome. Thanks.

Lorraine - :) I hope you enjoyed it. Thanks so much.

Kudos to you for posting such a traditional recipe. I've never had it before, love how soft that looks!

Beautiful traditional dish. Looks like hard work but worth the effort to make these! :)

Sig - It is soft and delicious! :) Thanks

Asha - Actually its not very hard to make and yes, it is delicious!

Oh wow something new and yum....

Wow, this looks really great...I'm not sure I'll be able to pull it all together in my kitchen (banana leaves and the steamer being two big problems!) but it's on my list to try somehow somewhere :) how did the aloo chaat bkfst potatoes turn out?

Awesome post!! Thanks! Never heard of it but looks like the Tapioca I have in water on my counter now.

My grandma makes this very often..I love love this ilai vadam.I like eating it without frying too.Nice that posted it.Neat tutorial!

Nithya - Haven't made it yet! Surprisingly it was the one day I didn't have potatoes in the kitchen and haven't tried it. Will let you know.

Stephanie - You're welcome. Yup, sago is very similar to tapioca.

These look really nice Arundathi. I love how it cooks on the leaf, very unique. I have never heard of this before, but would love to try it. Maybe on our next trip to India, I can find some!

My mom make it during summer months. We dry the steamed vadam in sun and store it. We deep fry it in oil just like you do any other vadam. The combination of illai vadam and any podi sadham or sambar is to die for. Do try to dry this the next time and store it. It takes a longer time to dry might be 2 days in full sun.

Jamie - Hopefully on your next trip to India, you'll come to Chennai and I can make some for you! :)

Nandini - I've had the fried kind but I actually like these better. They're healthier for one, but I love the flavor! But yes, vadams with sambar and rice is wonderful.

First time on your site. When my eyes fell on the Yelai Vadam, I was thrilled to remember every summer in my Madurai amma`s house. We would do the same thing, only she had little aluminum plates of around 10 or so that wd go on to a slat like stand and then we wd dry it and fry it in oil. It used to be DELISH....
Regards,

Anubhavati - I've had the dried, fried ones too but love it steamed. Thanks.